. . . Aaaaaand, now we’re having an uprising. And a pandemic. Because some s#!t went down.

I obviously don’t need to recap why the world is on fire right now. So I’ll start with this Thursday, when I sat in my new little small-town home office, watched the memorial service for George Floyd in Minneapolis, and wept. I’m not normally a big fan of Reverend Al’s zazzle, but damn, when he said, “The reason why we’re marching all over the world is . . . ” Well, just watch him say it, in this short clip:

This post was originally supposed to be about a different topic: STUFF. Namely all the STUFF none of us need, and that we can now SEE we don’t need, because we’ve been doing without it for three seemingly endless months.

The news (and our federal government) likes to tell us that “retail has been suffering.”

I heard a story on NPR about how “retail is suffering” in Ketchikan, Alaska, since the cruise ships aren’t coming there right now, which means there are no tourists to buy the made-in-china T-shirts and snowglobes filled with melting glacier water or whatever (hopefully that’s not an actual thing).

The real reason no one’s buying a bunch of STUFF right now is that we don’t need it. We need food, and, apparently, we need toilet paper. That’s about it.

You know what has been suffering? Black people. Human rights. Four-hundred and one years of white people putting their knees on black people’s necks. And this time we were stuck social-distancing in our homes, in front of our TVs and computers, so we could all see it go down.

I lived in LA during the Rodney King riots. Not in South Central or anything, but close enough to the action that a store down the street got burned down, and there was a serious 7pm curfew for a week.

White people weren’t out there in solidarity, carrying signs, peacefully protesting the acquittal of the cops who had ruthlessly beat Rodney King in the street. I guess we were too young to remember the earlier civil rights protests, and not as woke as youths these days. We had no template. Well, now we do. Apparently we needed 28 more freakin’ years of unarmed black people being murdered (not to mention the invention of iPhones) to see how wheels-off the systemic racism is in our country.

I’m gonna sound like an asshole right now, because I gasped when I saw the Target store in Minneapolis being looted. What?! OMG, I’d loot a Target! I love their stuff! I love STUFF!!! (Okay, Karen.)

I’m not proud of it, but I do. I love stuff because other people love the stuff I acquire, and reward me for looking good. (“I love your outfit! Where did you find that?”) Or for making my home look good. (“Your place is beautiful! What great taste you have.”) When I buy stuff, I feel one item closer to being complete/lovable. Doesn’t have to cost much, and it rarely does — that’s one of my superpowers.

Compliments are a hit of dopamine that researchers say is like a mini-orgasm. And I’ve tied them to the acquisition of STUFF. I even love the process of looking for stuff. It’s like going into an altered state, far from the worries of real life. Now, though, I’m having a chance to re-program my brain. Now that I’m out of NYC, and not walking around every single day with instant access to “stuff” stores, it’s a bit easier.

Being locked down for this pandemic has shown me how little STUFF I need. 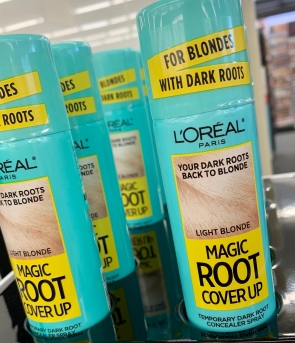 Oh, I can get pulled back into my not-so-old ways. I went into a CVS this week for antihistamines. (Country life.) There were only a few other people in there, and we all tiptoed around the empty store in our masks. A display of cheap, sparkly, basically disposable jewelry caught my eye and reeled me in momentarily . . . until I realized how stupid it would be to even look at it right now — for many reasons, one of them being that I’ve barely showered in the past 12 weeks, much less worn jewelry. Another being everything going on in the world right now, which doesn’t go well with blingy rings. And then there’s all the externalized costs created from making stuff like that. I don’t think I’ve ever explained externalized costs in this blog . . .

This will be quick and painless, I promise. Many of the costs of producing stuff like iPhones and thermal water bottles and Scotch tape dispensers — basically most of the stuff that’s on my desk right now — are externalized, meaning that neither the consumer nor the producer pays the entire cost of the product. Those costs are instead absorbed by innocents along the production stream. Think about who got paid $1.40 an hour to make your hairdryer (assuming you’ve styled your hair in the last three months) when you see “Made in China” or Taiwan or Bangladesh on its tag. Or the discarded plastic packaging that ends up around some poor sea turtle’s head. Or the pollution created by the factory that somebody has to clean up — or incur medical bills from said pollution making them sick.

Know what our biggest externalized costs are? Carbon emissions. (I actually wrote about how environmental impact and race are interconnected in this nerdy class paper a while ago, if you’re interested). Anyway, back in CVS, I turned toward a long, beautifully stocked makeup aisle that was completely devoid of customers . . . and I let it remain so, wondering if Maybelline and L’Oreal would be the next brands to declare bankruptcy, like my beloved J.Crew. I passed an end-cap on the aisle, and laughed about their at least getting one thing right during civil-rights protests in the middle of a pandemic: it was a tall display of temporary root-concealing spray. But since I’m “such a smart shopper!” I’d bought mine weeks ago. (And it’s also not lost on me that the Root Magic cover-up on display was for blondes. White privilege much?)

So here we are, stripped down to our bare skin and our self-prepared meals, and the news. 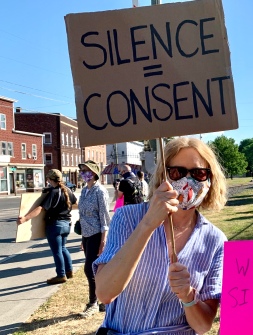 Yesterday I marched. You know you live in a small town when you’re having drinks with a few pals on the newly re-opened porch of a local resto, including your friend who happens to be the police commissioner (remember from the pancake breakfast?), and he helps your waitress notify the chief of police about a BLM march through town that she’s organizing for the next day, so they can handle traffic or what have you. Main Street is only a block long (technically), but we covered a mile or so of territory, and the 75 or 80 of us did our share of chanting and sign-carrying, and stopping to say the names of many unarmed black people who lost their lives to racism.

I wore a blue-and-white-striped linen dress (and lots of Root Magic), because I think about stupid stuff like what I’m gonna wear to protest systemic racism. Gawd. But here’s a wee snippet, with me behind the camera, not in front of it. A friend of mine said it all looked “so damn cute”; not sure if that’s an insult or a compliment — you decide:

A lot of locals heard about it later, or saw us go by, and wished they could have joined . . . so it’s happening again this weekend. Bigger and better. Because it’s working. Changes are starting to be made. Thank goddess.

Meanwhile I’m gonna try and stay off Facebook Marketplace, even though I did buy a bicycle last week — talk about cute!! She loves wooded trails, and saves gas.

Before I go, lemme wrap up our convo about Alaska’s tourism dip real quick. Ketchikan became a boomtown because of timber. When the timber ran out, tourism became its big industry. I myself have been a tourist in Alaska — my family went on a Princess Cruise when I was 10. (That’s me at right, holding a bit of glacier.) It should be noted that the sales tax from all those souvenir T-shirts and whale-watching trips fund the fire department (and the police department, but we’re not really bringing up funding the police right now). Meaning retail does have a prominent place in capitalism. There are just better, cleaner ways of doing it.

In fact, I wonder if this is all some sort of economic reset that happened organically. I have a call in to my friend Jennifer, who’s an economist, to ask her opinion. Meanwhile, I just Googled “economic reset,” and discovered that in September, a big group of businesspeople and academics actually began calling for a reset, and the need to be more inclusive in who their companies benefit, and to take the climate crisis seriously. Then this all happened.

The really big chunk of Alaska’s economy is actually oil. Good old climate-warming fossil fuel. FYI, America, the sun does shine and the wind does blow in Alaska. Catch my meaning?

But You-Know-Who, who “knows windmills very much, I’ve studied it better than anybody” [sic], doesn’t like wind turbines. Here’s a minute and a half of an oldie-but-goodie from five long months ago, before I tell you what he rolled back this week:

So, what law did his administration scale back? Bird protections, of course. Specifically part of the Migratory Bird Treaty Act of 1918.

1918 — wasn’t that when we had our last big pandemic? Let’s assume it’s a coincidence. But the Act was one of the first federal environmental laws. It made it unlawful to pursue, hunt, take, capture, kill, sell, export, import, bitch-slap, man-handle or be mean to migratory birds. (Just makin’ sure you’re awake.)

Half a century in, the law was applied to corporations that killed birds “on accident” when they could have avoided it, making it so oil companies would put netting over toxic waste pits — stuff like that.

But the Trump administration has now said the corporate killers of birds that fly into oil pits, mining sites, telecom towers, and even wind turbines are off the hook. To give you an idea of how the Migratory Bird Treaty Act worked, BP had to pay a $100 million settlement a decade ago when it spilled all that oil in the Gulf of Mexico, killing about 100,000 birds. I wonder which of our Bird-Lover-in-Chief’s industry cronies benefits from the new loophole . . . ? Hmmm . . . so many to choose from.

FYI, the final decision will come after a 45-day public comment period. So, if you want to add “Birds Matter” to your protest repertoire this month, have at it.

Oh, and in case you don’t know, I’m working on a book, along the lines of this blog. If you follow me (i.e., subscribe below) or leave a comment, it’ll help my agent get it published. Now I gotta go write to my state and county representatives about police reform. Let’s save the world!

10 thoughts on “Black Lives Matter; “Stuff” Not So Much”

BYOB (bring your own Blowpop). Everyone needs a lolly after a shot.
13 years ALL CLEAR!
Happy Waster! I mean Easter! It’s not even St. Patrick’s Day yet, but start stocking up on sweets wrapped in lots and lots of plastic...!
I like these new brown 90% recycled bags from the CVS pharmacy even more than their coupons. (And I live for their coupons. ;-)
Loading Comments...
Comment
×
%d bloggers like this: